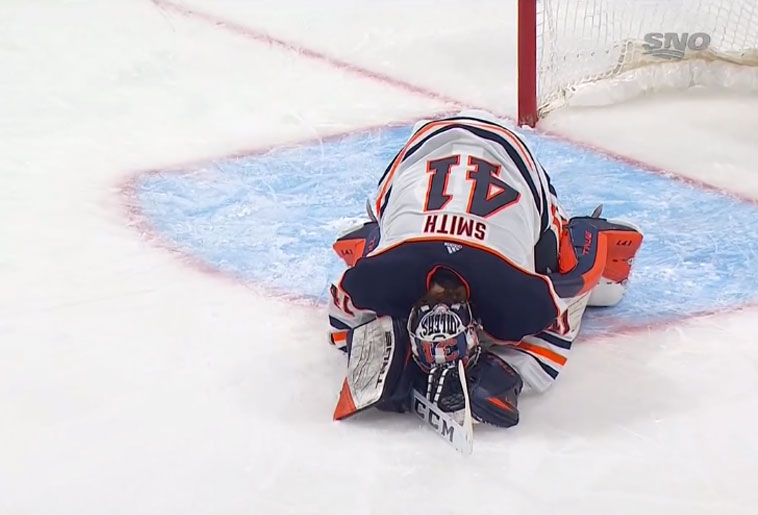 Mike Smith dejected after giving up the game and series winning goal against the Winnipeg Jets in the first round of the 2021 NHL Playoffs.

Hope is what every NHL team starts their season with. Confidence is what most teams build during the season.

Questions are what you’re left with when everything goes wrong.

Mike Smith’s future in Edmonton remains unclear. Looking back at his 2021 campaign, it wasn’t a bad year.

Where do Mike Smith and the Oilers go from here?

Rushing into the offseason, with the Seattle Kraken Expansion Draft, Smith at 39 years old, will be hitting a pretty competitive free-agent market.

Can Mikko Koskinen Step Up?

Mikko will be entering his 4th full year in the NHL, most likely continuing his backup role. In his 3 years with the Oilers, Mikko has an average win percentage of 51.86%, despite a .908 SV% and 2.92 GAA.

Unless something drastic happens in the off-season, I don’t see Edmonton’s top brass going all-in on Mikko.

Despite lingering COVID-related issues, the Edmonton Oilers claimed Alex Stalock off waivers on March 1, 2021. While Stalock did not see any playing time this year, he was on the ice for team practices.

Per CapFriendly, Stalock has one more year with the Oilers. What he does with it is in his hands.

Where Do We Go From Here?

The Oilers are in dire need of a legit and dependable number 1 goaltender. Mike Smith won’t fit that bill, and Koskinen will require more time before he can take on a full workload. Stalock may possibly not be game ready come next season, leaving little in the Oilers’ bucket that’s NHL Starter ready.

Looking at the Free Agent Market, it’s going to be tough to say who’s available.

Most of the top goalies that are UFAs at the end of the season, will most likely return to their previous teams.

An interesting scenario comes out of Boston as both Tuukka Rask and Jaroslav Halak are UFAs. The Bruins will more than likely stick with Tuukka Rask dependent on a.) how far they go in this year’s playoffs and b.) how much money he wants in the off season.

That being said, Jaroslav Halak is still a fantastic goaltender but may not have that much more of an upside than Mike Smith.

Petr Mrázek is an interesting choice. He’s put up decent numbers in his career and has taken on a decent workload. Carolina is currently enjoying success with Alex Nedeljkovic in net during these playoffs, who will most likely draw Carolina’s attention during the offseason.

One final goalie I want to take a look at is Antti Raanta. He’s been dependable in Arizona and has been able to hold the reigns despite splitting time with Darcy Kuemper and Adin Hill. Given his own crease, he could shine.

Regardless, it’s not going to be easy for Edmonton. They have 2 superstar forwards, and a decent core. They just need someone that they don’t have to worry about in net to help them get past the next playoff hurdle.

Who do you think Edmonton should target for their next starter? 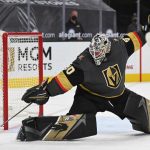 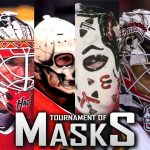